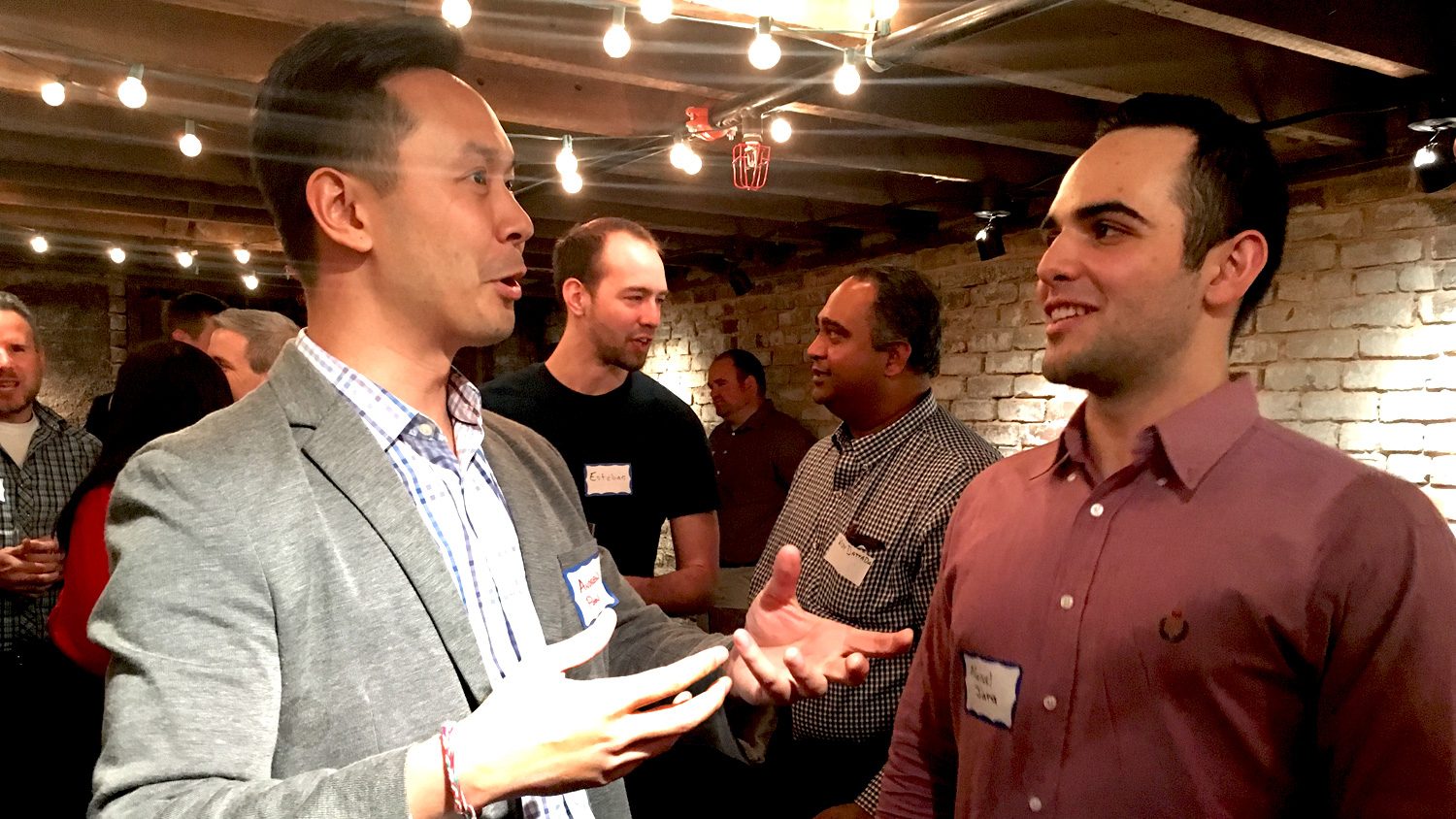 Andrew Poon, ’17, had an idea — not for the first time — of how to add value to people’s lives and revenue to his bank account. An entrepreneur by nature, he had launched his first business, a nonprofit, while still an undergraduate student in NC State University’s industrial engineering program. He started a more successful venture shortly before he enrolled in a master’s degree program at Poole School of Management to learn global innovation management. And in his final semester, he and a friend had another brainstorm.

Poon had learned from each of his prior ventures. This time, he decided to leverage the learning curve of other start-up founders. He pulled together a slide deck and his courage, polished his presentation and strode into a networking event hosted by the NC State Entrepreneurship Clinic.

“You always hear how the most successful people had a mentor who invested in them,” Poon said. “I was hoping to find someone to invest in me, to be honest with me, and to challenge me into growing as an entrepreneur.”

Finding a mentor is harder than it seems. People who have accomplished great success don’t have a lot of free time. Lewis Sheats, the executive director of the NC State Entrepreneurship Clinic and a serial entrepreneur himself, made it easier for those in need of mentoring to find someone willing to help. He invited a few dozen Triangle entrepreneurs to a series of four gatherings held at a local restaurant during the spring 2017 semester. A few dozen students, aspiring business owners all, joined them. Using a speed-dating format, the potential mentors and mentees learned what each had to offer.

“It’s invaluable, if you are a serious entrepreneur, to have that experience,” Poon said.

At the event, Poon met Eric Huang, founder and chief executive officer of Prometheus Group, a 150-employee asset management software company acquired last year by a private equity firm. Poon asked for a meeting, and Huang set one up for seven in the morning. At that early hour, Poon explained his idea for a long-distance ride-sharing platform. Huang asked questions about how Poon planned to build the business and program the service, then he stated flat-out that he didn’t like the idea.

But he went on to explain why. That proved to be a valuable gift to Poon.

“I agreed with him on the spot,” said Poon, who had had the same misgivings. “I needed to hear it from someone else.”

What should have been the end turned out to be the beginning.

“He didn’t like our idea,” Poon said, “but he liked that we were the kind of people who go out and do things. We weren’t afraid to fail. That’s the most important thing for entrepreneurship, and it’s something you can’t teach.”

Huang had had an idea for a business simmering on a back burner in his brain for a few years. He hadn’t found anyone he wanted to work with on it until he met Poon. He suggested that he and Poon partner to make it happen. He laid out his idea and what success would look like, and Poon agreed.

In the new venture, Real E Notes, Poon and Brandon Staton are creating a checklist for real estate agents to add more value to their communication with clients. For instance, real estate agents might walk into a house and notice that a pet has left scratches in the floor. The agent would run the numbers to ascertain how much it would cost to refurbish or whether the floor could be refinished at all. By compiling such information on a number of areas of potential repairs and renovations, the agent could generate a report to give clients a better idea of the true cost of buying the house and fixing it up.

Simultaneously, Poon and Staton are working on another project called Shipmint, a logistics platform specializing in obtaining the best small-package shipping rates for volume shippers.

Poon and Staton have their offices in the same building in Raleigh as Prometheus, and Huang keeps an open-door policy for any questions the young entrepreneurs have. Once a week, in their standing Friday meetings, Huang checks in to make sure Poon’s and Staton’s fledgling companies are on the right trajectory.

“Every day is a new adventure, a new challenge,” Poon said. “Every day, I’m learning something new.”

Now that the company has started down a path toward success, Poon has returned to the Entrepreneurship Clinic networking meetings, this time as a potential mentor. One piece of advice he wants to impart is to urge aspiring entrepreneurs to make the most of the networking opportunities by coming with an idea.

“You need a tangible objective to get entrepreneurs to work on it with you,” he said. “Talk to people and be willing to hear their feedback.”

He wants to pass along what he has learned from Huang about how to recognize a good idea, and how to think about it from a business perspective.

Another bit of wisdom he learned firsthand: “Put yourself in a position to be lucky.”

Poon considers himself lucky to have met Huang. But it was not random. Poon continually put himself out to connect with people and build his network. He came up with ideas and worked them through to present a feasible concept. He was willing to try, and to risk failure, and to try again.

“Eric saw something in me that was worth taking a risk on,” he said.

Coming to the networking events as a mentor is much less stressful than when he went as a potential mentee, Poon said. Now he gets to listen more, he doesn’t have to spend time preparing and he can indulge in the joy of empowering people to capture their potential.

“I can draw from the energy of people who want to go out there and create something,” he said.

Mentoring has shaped Poon’s career; shaped his life, really, because he views his career as a trajectory, more than an end goal. Every day, he wakes up wanting to be better than the day before. He offers a few final points:

This post was originally published in Poole College of Management News.

As we work toward a fall return, this article presents protocols and guidelines to help promote a safe and supportive environment at the Entrepreneurship Garage.