NC State strives to attract top-notch talent to our university. And the driven, dedicated people here consistently turn NC State research into real-world results, launching startups and patenting technologies at a record pace. In turn, NC State has continued to bolster its reputation as one of the world’s top-tier research institutions — ranking No. 2 in licenses and options executed and No. 4 in startups launched across all U.S. universities without a medical school.

So being recognized as the Innovator of the Year or the Entrepreneur of the Year is no small feat on this campus. Chancellor Randy Woodson presented the awards Oct. 1 at this year’s Celebration of Innovation, sponsored by the Office of Research Commercialization.

Innovator of the Year 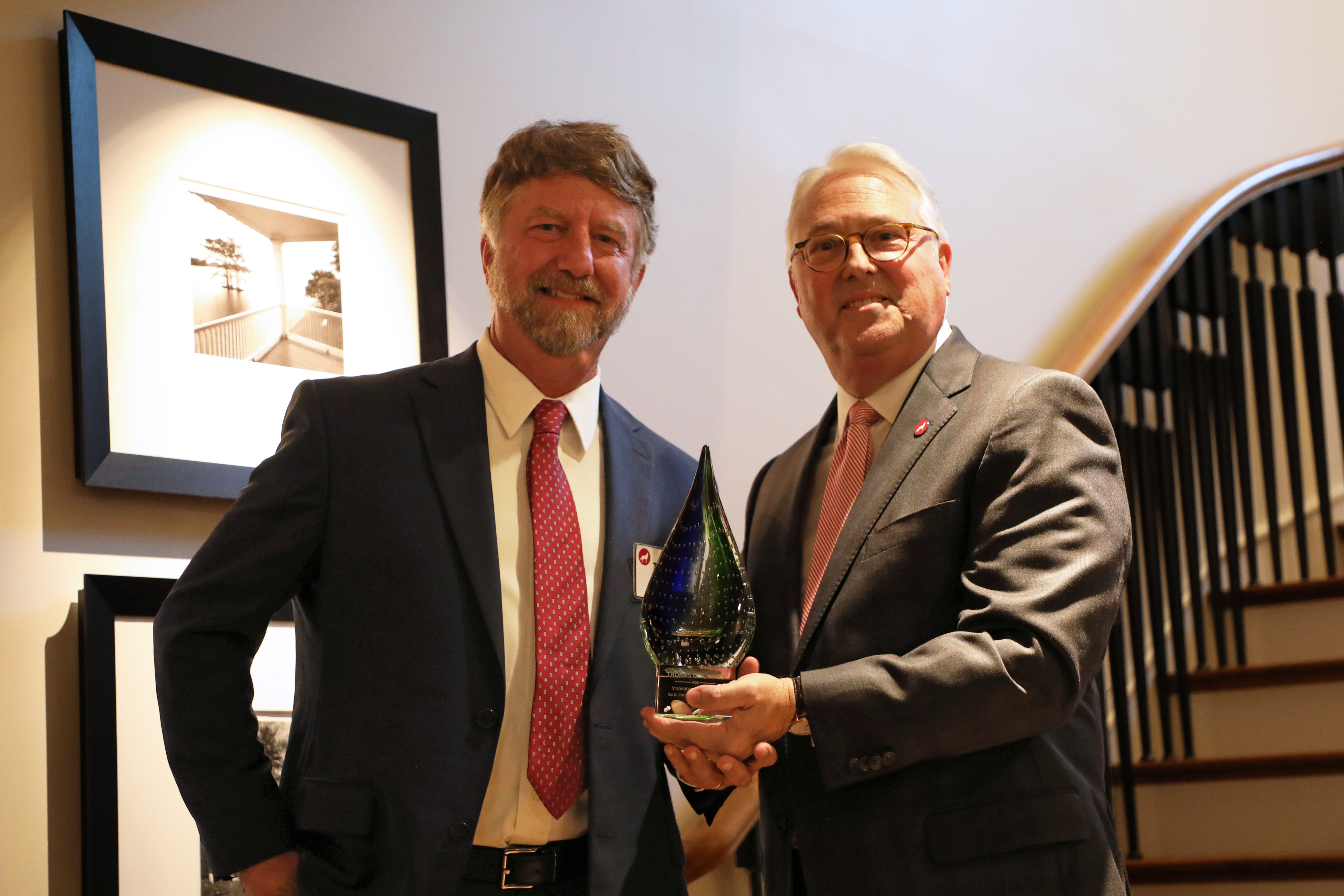 Tom Ranney received the Innovator of the Year award for his work in plant breeding and new-crop development. Ranney, a horticultural science expert and the JC Raulston Distinguished Professor, is recognized as one of the most accomplished ornamental plant breeders in the world. Ranney has 44 active plant patents, with four more currently pending.

Licensed by some of the world’s largest international horticultural companies, Ranney’s plants are sold across the globe and have generated over $100 million in retail sales. Many are in early stages, with sales expected to increase considerably over time. His most significant commercial successes — Invincibelle and Incrediball hydrangeas — have already sold over 1.6 million units to date. These successes have drawn in a range of recognition and public and private investment for our university.

However, his distinguished 30-year career — spent entirely at NC State — has been highlighted by not only the results of his research but his teaching and outreach as well. Ranney plays a highly active role in NC State Extension; and what’s more, through a creative partnership with the Breast Cancer Research Foundation, the sale of Ranney’s Invincibelle pink hydrangeas has raised nearly $1.3 million.

Additionally, Frank Louws, who heads the Department of Horticultural Science and nominated Ranney for the award, said Ranney has trained many students who’ve since become faculty members at leading institutions or scientists at the USDA or prominent private companies.

“He is well-known as a thoughtful, rigorous, and supportive advisor; his innovation and leadership inspire emerging future leaders,” Louws said in his nomination letter. “His students win awards, publish, get jobs, and make impacts.”

Many of Ranney’s former students are now building their own portfolios of inventions and patents, Louws added.

Earlier this year, Ranney’s contributions and achievements were nationally recognized with the highly distinguished Scott Medal. In 2017, Ranney was named a winner of the American Horticultural Society’s Luther Burbank Award; the same organization named Ranney as a winner of the H. Marc Cathey Award in 2008. In 2013, Ranney was recognized by the NC Nursery and Landscape Association for outstanding contributions to the horticultural industry.

Ranney has published 87 peer-reviewed journal articles, over 120 research reports, five extension publications and over 25 popular articles. He is a member of the National Association of Plant Breeders, the American Association for Horticultural Science and the International Plant Propagators Society.

“Dr. Ranney has made broad and profound impacts on sustainability, education, economic development, and public welfare,” Louws said. “His academic record embodies the land grant mission — with excellence in research, education, and outreach.”

Entrepreneur of the Year 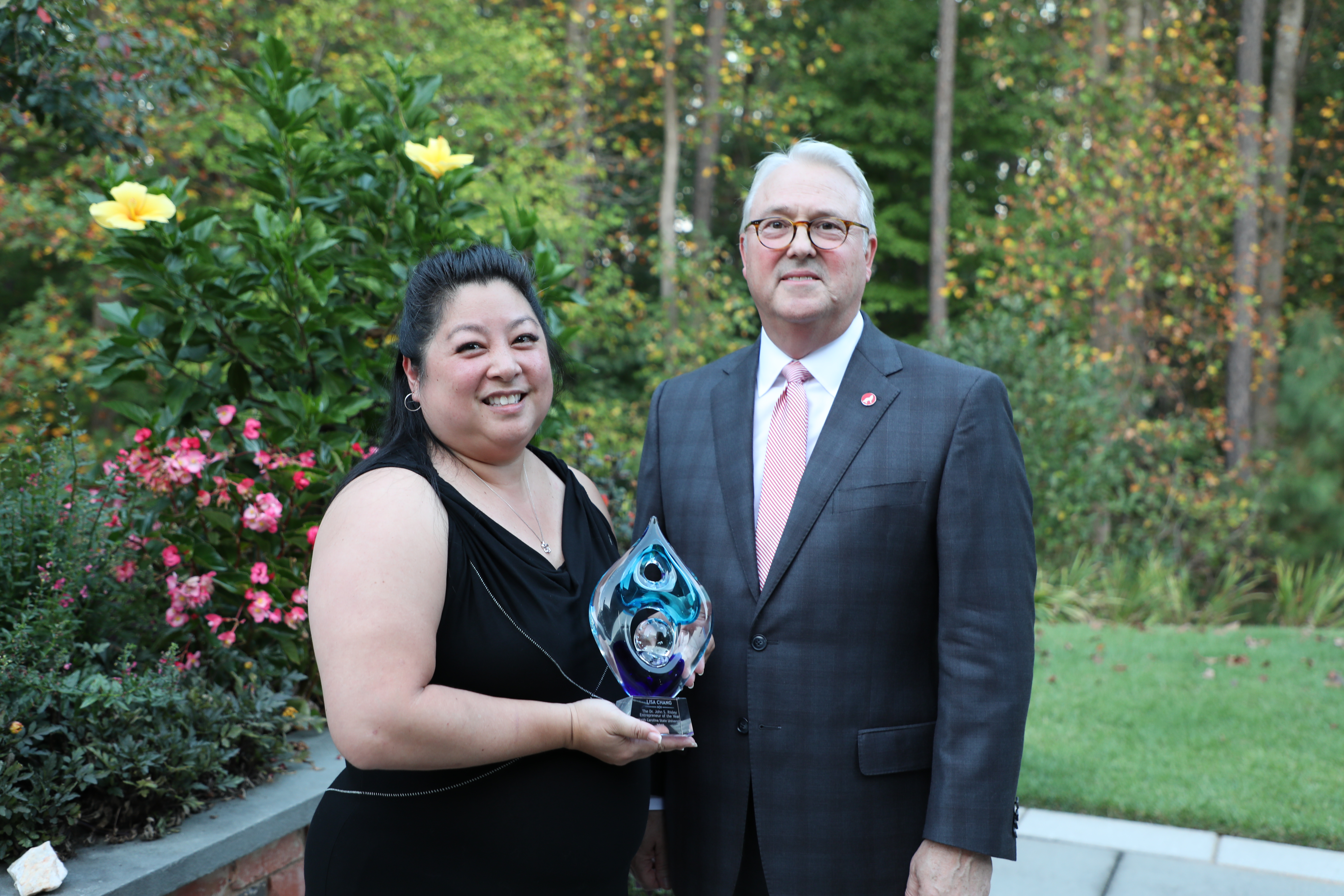 Lisa Chang received the John S. Risley Entrepreneur of the Year award (named for the NC State physics professor who founded WebAssign) for the dedication she’s shown to advancing entrepreneurship at NC State, through a variety of roles and contributions.

Chang’s primary role is director of the Poole College of Management’s Technology Entrepreneurship and Commercialization (TEC) program, which teaches teams of engineering and business students how to identify technologies with commercial potential — and how to get them to market. Chang co-teaches a number of TEC courses that show students how to identify marketable technologies, evaluate potential products and markets, and develop a business plan and commercialization strategy.

The Office of Research Commercialization and other technology transfer offices contribute technologies for the TEC students to work with, and the teams are matched with local mentors. At the end of the 12-month program, the students have the opportunity to launch a company based on the technology they’ve worked with. NC State startups Locus Biosciences and Tethis — which have raised a combined $51.3 million in investment funding — were both launched by alumni of the TEC program.

But Chang’s contributions go far beyond the TEC program. Since joining the university in 2010, Chang has frequently consulted with and supported the Office of Research Commercialization. From 2011 to 2016, Chang led the Chancellor’s Innovation Fund (CIF), and she still serves as a member of the selection committee. The CIF has enabled the launch of two dozen startups based on NC State technologies — which have earned $53 million in follow-on funding. Chang also plays a key role in the Wolfpack Investor Network (WIN), for which she’s served as the diligence director since WIN’s 2010 inception.

Chang was nominated for the award by Wade Fulghum, the interim executive director of the Office of Research Commercialization and chair of the WIN steering committee.

“WIN has grown to 148 members and has invested over $10.1 million in 18 NC State companies, none of which would be possible without Lisa’s valuable contributions,” Fulghum said in his nomination letter.

In addition to all these notable efforts, Chang also was “instrumental” in standing up NC State’s NSF-funded I-Corps site program and continues to serve as an I-Corps instructor each semester. NC State’s I-Corps program has led to the formation of seven startups, which have generated $1.58 million in follow-on funding.

“Lisa’s countless hours spent instructing and holding office hours — despite her other commitments across campus and off-campus — prove her to be one of the most valuable and committed members of the I-Corps team,” Fulghum said.

Fulghum said it’s important to understand that in many of these roles, Chang is volunteering her time, often receiving no financial consideration for her contributions.

“Lisa Chang embodies entrepreneurship at NC State,” Fulghum said. “Lisa plays a major role in showcasing our university as a leader in technology commercialization and entrepreneurship and is unrivaled in her passion and commitment to the NC State community.”

Also recognized at the 2019 Celebration of Innovation were the 21 startups launched in partnership with Office of Research Commercialization in the past year, the six projects that were awarded support from this year’s Chancellor’s Innovation Fund, and the many faculty members who received patents in the past year.

This post was originally published in Office of Research and Innovation.