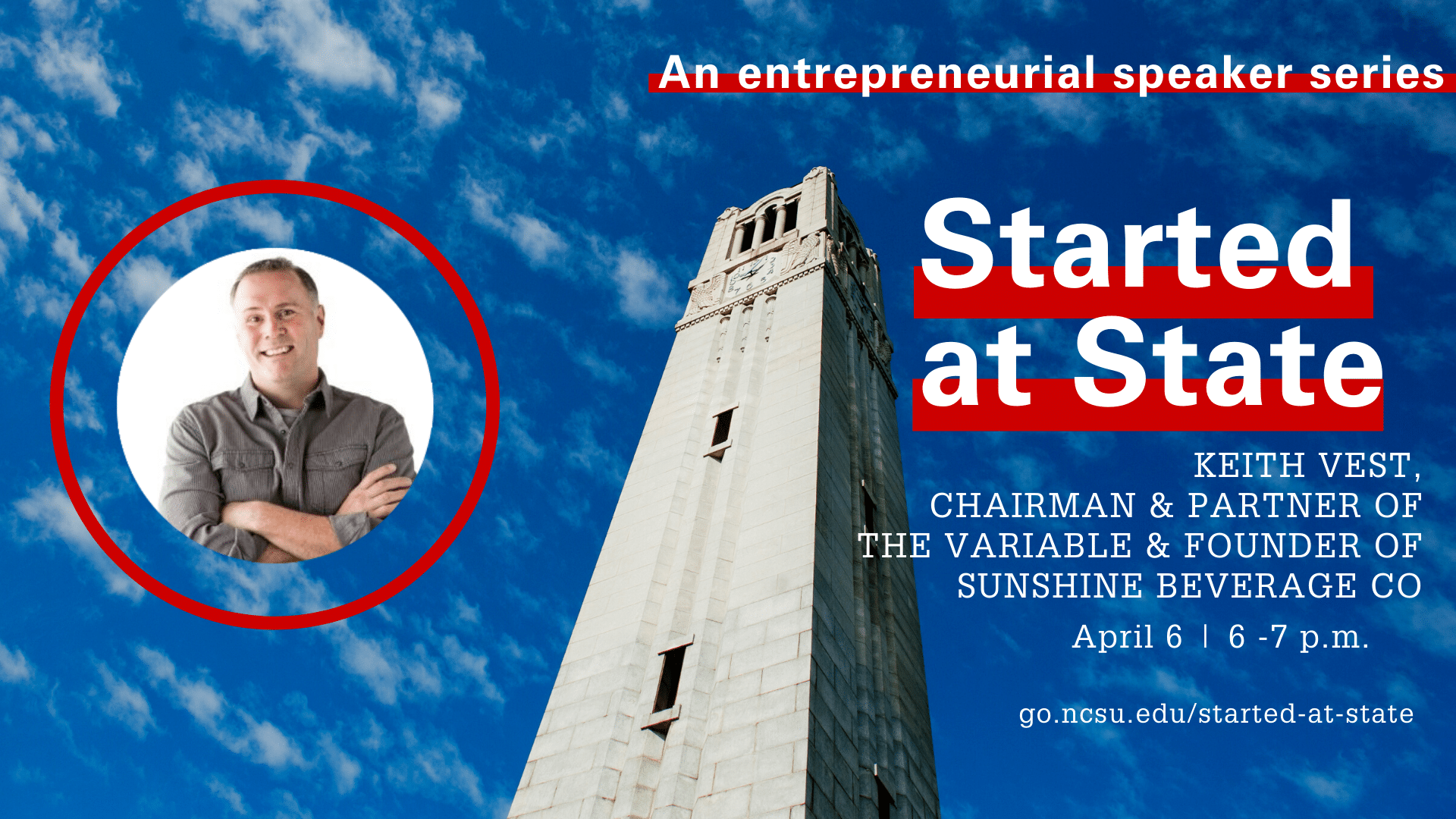 Join Keith Vest, Chairman and Partner at The Variable, and Founder of Sunshine Beverage Co, presenting “Pivots, Steps and Stumbles.” Career paths are rarely straight and narrow, but with all the zigs and zags that come your way, the tiny steps you take during your working life can make for a great adventure. Keith Vest shares how he came to NC State, left with a degree in design, spent his 20s trying to figure out what he really wanted to do and somehow found himself running an advertising, design and innovation company thirty years later.

Keith graduated from the College of Design at NC State University and has spent the last 20 years owning and operating businesses in brand innovation, advertising, and design. After spending ten years working for creative agencies in the Carolinas, Keith founded PAVE Creative Group, an award-winning design and production agency. During his tenure at PAVE, Keith was recognized as Triad Business Journal’s 40 Under 40 and chaired the Board of Directors at Cancer Services. After leading PAVE for twelve years, Keith revamped the company’s business operations and co-founded The Variable along with Joe Parrish in 2011. Since that time, Keith has helped lead The Variable to be recognized as an AdAge Southeast Small Agency of the Year three times, named one of Fast Company’s Best Workplaces for Innovators two times and recognized by Forbes as one of America’s Best Startups. Keith co-founded Sunshine Beverages, a fast-growing energy drink company, and helped steer the brand through its startup and early growth stages. Under his leadership, he helped lead Sunshine to independent operations and secured outside investments with Teall Capital and Cypress Ascendant Holdings. Originally from Fort Worth, Texas, Keith has lived in Winston-Salem since 1991 with his wife, Salem, and their three amazing children, Kennedy, Dow and Eli.

This entrepreneurial speaker series features both current NC State students and alumni business founders. Come learn from fascinating tales from the trailblazers who Started at State as they share the secrets and setbacks encountered on their journey to entrepreneurial success. This event is great for anyone looking to learn more about unconventional career paths in entrepreneurship, student entrepreneurs, and all those curious to see what it takes to start a business from scratch.

Food will be served for those that RSVP. We will be meeting at the NC State Entrepreneurship Garage at Partners I.